How much revenue growth is possible in telecom markets across the globe, looking at fixed and mobile connectivity, entertainment video and fixed-mobile convergence? It depends on which markets any service provider operates in, and how close to saturation those markets might be. Mobile operations might logically be viewed as having more upside than fixed networks, but the total addressable opportunity is reaching a logical end.

A.T. Kearney believes that in Western Europe, there is room to grow revenues 25 percent. In  Eastern Europe about 10 percent growth in legacy services remains. In Russia there is about six percent upside remaining.

Beyond that, much hinges, apparently, on the ability to create video, audio, content or connected device businesses, in most of those markets. Upside in new businesses such as those are most limited in Western Europe and the United States, both mature markets. 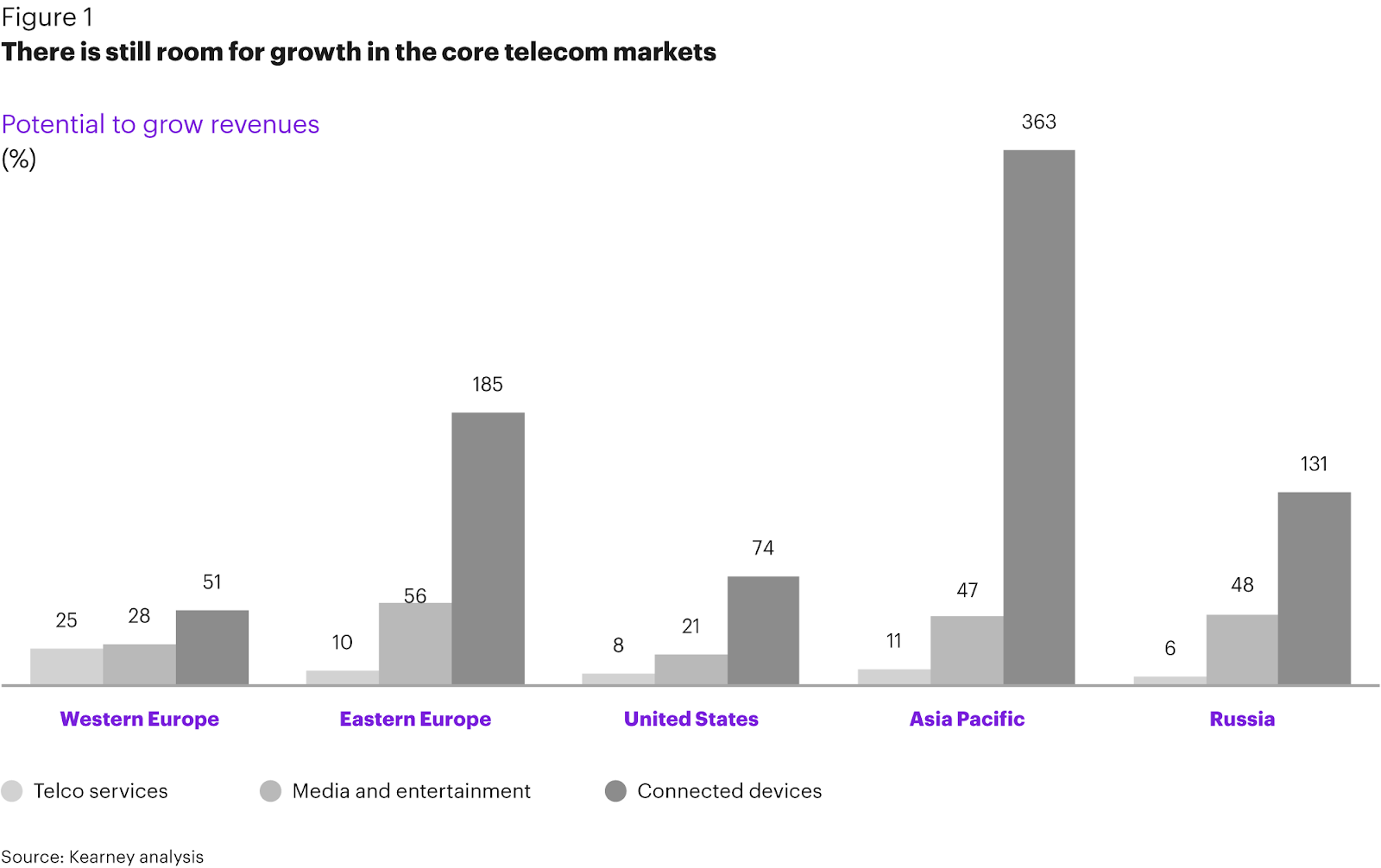 Also, the U.S. market also faces the challenge of high spending on connected services, possibly indicating that much of the opportunity already has been seized (not adjusting for purchasing power parity, a way of normalizing spending across countries).

Most of the potential future growth, in AT. Kearney’s view, will come from other roles in the connected services ecosystem, in such areas as online media, entertain­ment services and connected devices.

The rub is such moves imply that firms must compete with firms already possessing significant advantages. In a U.S. context, for example, that could mean taking on Netflix, Amazon, Apple, Google and others. In other countries it means taking on media giants.

And that might be the greatest challenge of all, as most apps or services requiring use of connectivity can be created and delivered without the permission of the internet service provider. 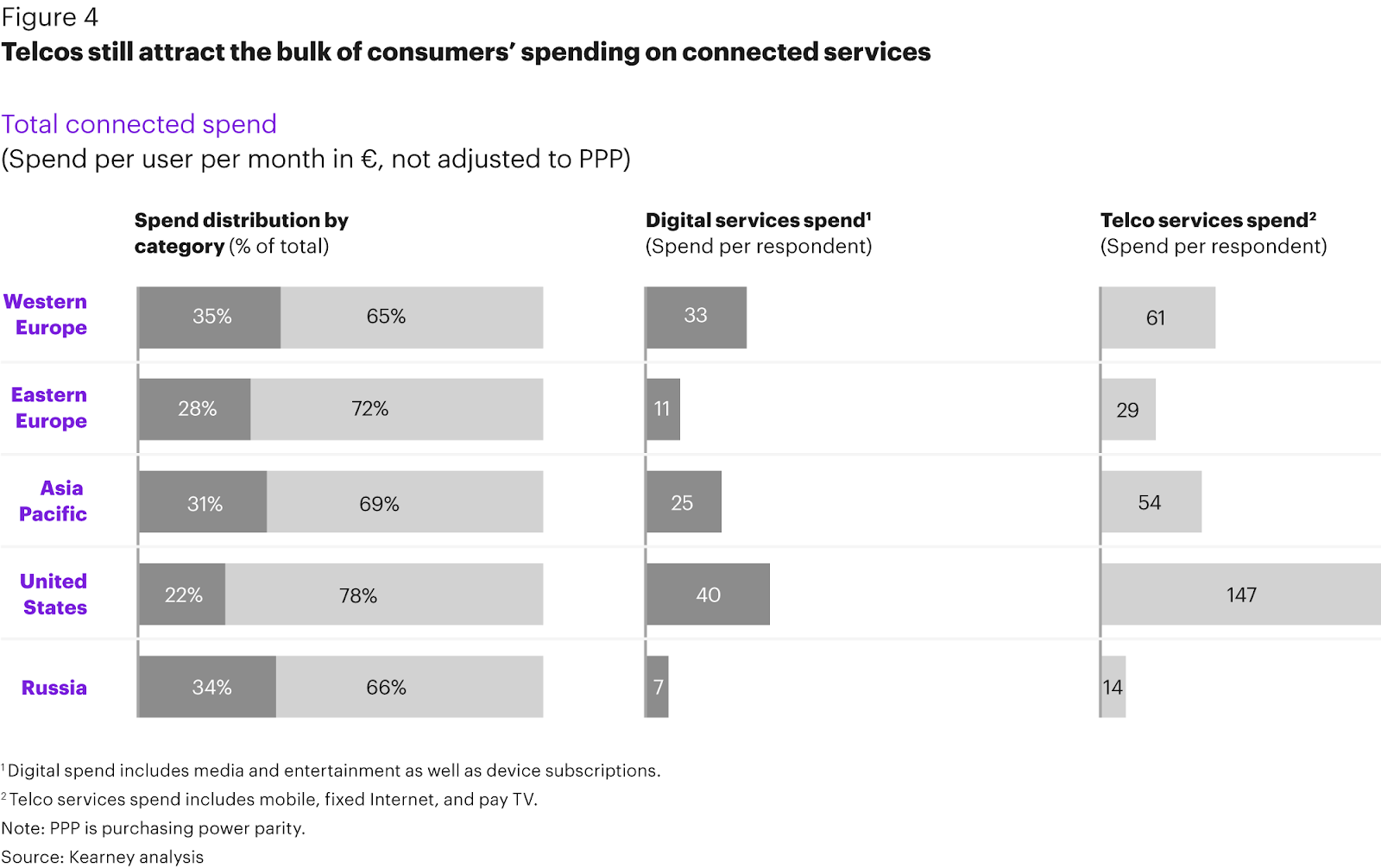 “In every region of the world, video-on-demand services generate the largest chunk of digital services spend,” the firm argues. “Music and online gaming tend to be the next biggest generators of revenue.”

Globally, consumers spend an average of €8 per month on video-on-demand, €4 per month on music, and €4 on gaming, for example. In absolute terms, people in the United States and Western Europe spend the most on video-on-demand services at €14 and €10 per month respectively, well ahead of spending on music, gaming, and other services. In Asia Pacific, spending on digital services is more evenly spread across categories. 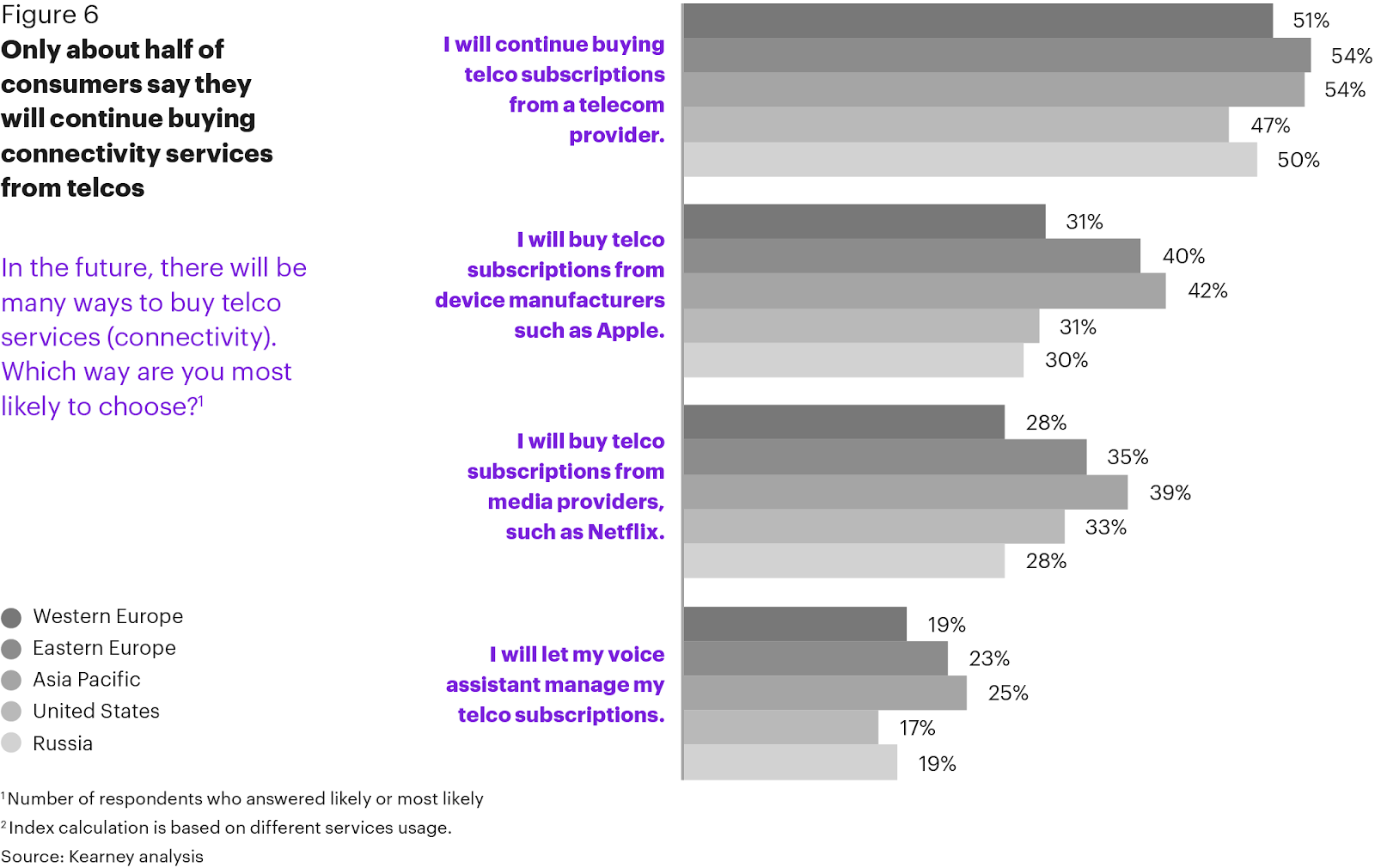 But some mobile service providers--including Verizon and T-Mobile, believe 5G gives them an opportunity to take existing market share from incumbent suppliers. Verizon, for example, will offer a 5G fixed wireless home broadband service that competes with Charter Communications and Comcast offers.

Those posted prices are for Verizon wireless customers. Others will pay $70 a month. There are other subtleties, though. The cable companies require customers to rent home equipment, generally adding about $10 a month in extra fees, and often require contracts as well, so the recurring cost is very close, even for non-Verizon mobile customers.

Still, if Verizon were able to cross-sell even 10 percent of its mobile customers 5G Home at $50 per month, that would generate $5.6 billion in annual revenue for the company. That is a good example of how a big telco can capture that eight percent growth remaining in the legacy business.

What Verizon does next is the issue, as it seems to be approaching the limits of revenue growth from legacy services. 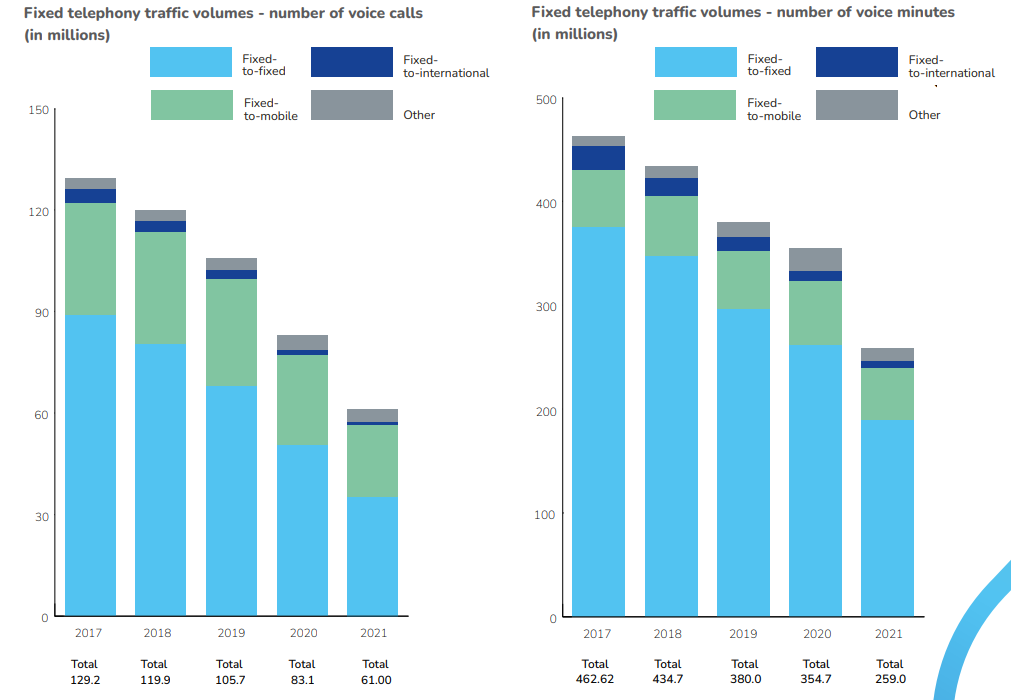