How much is Dish Network spectrum worth? Observers continue to argue about the matter.


Analysts at Kerrisdale Capital continue to argue that demand for Dish Network’s spectrum are wildly optimistic, and that spectrum prices are headed dramatically lower.


By some estimates, facilities-based U.S. mobile operators, plus Dish Network, own about $368 billion worth of spectrum licenses.


In fact, some argue that T-Mobile US spectrum accounts for more than 100 percent of its total market value.


But the market value of any particular block of spectrum, or Dish Network’s holdings, hinge on several assumptions. First, one has to assume that the potential buyers (AT&T or Verizon, principally) “need” that spectrum, and need it soon.


And one has to assume would-be buyers can balance all that with capital investments in the coming 5G network, plus any other strategic investments that might be made.


Finally, longer term, as the U.S. spectrum licensing regime shifts to spectrum sharing and release of huge new swaths of spectrum in the millimeter wave region, one has to anticipate that spectrum licenses, though still valuable, might be worth less. 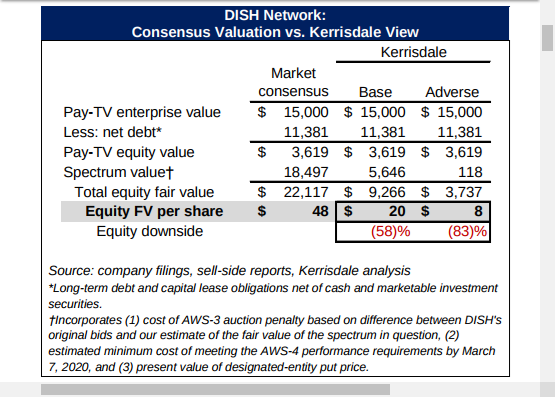 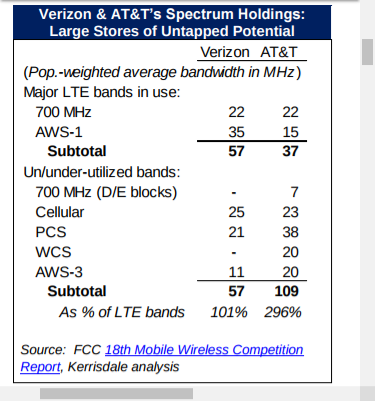 Nearly everyone agrees that much more mobile spectrum will be needed in the future (a few might argue that future needs mostly can be met by use of smaller cells). The issue is how much, and when, that might happen.


Not so soon, Kerrisdale analysis suggests. Looking at use of the 4G networks, for example, Kerrisdale says that with average (mean) smartphone usage of 3 GB per month, with a median of 1 GB, there is an implied load of 0.009 megabits per second, per device.


Also, for a number of reasons, Kerrisdale expects spectrum prices in the 600-MHz auction ot fall dramatically from the last AWS auction, which Kerrisdale says Dish Network was able to “game.”


For starters, Sprint will not bid at all, and Dish Network is unlikely to have the resources, much less the appetite, to do so. AT&T and Verizon probably will try to win about 20 MHz each, while T-Mobile US is expected to win most of the 30 MHz of reserve spectrum for smaller carriers. That amounts to demand of about 70 MHz, of an offered 126 MHz of so of capacity.


In other words, less demand than supply; hence the likelihood of lower prices.


In a regulatory environment that seems now to have shifted away from large mergers, there further is the issue of whether roadblocks might now be put in the way of any sale of Dish Network spectrum to either AT&T or Verizon, for antitrust reasons.


Nor, contrary to some popular belief, is the mobile business an especially lucrative business. Profits on invested capital range from a high at Verizon of 16 percent to a low for Sprint of just one percent, with T-Mobile US earning three percent and AT&T eight percent.


The point is that, no matter now valuable, none of the providers can afford to overspend on spectrum, especially if new options are going to emerge (new spectrum, lots of shared spectrum, better ways to use even more unlicensed spectrum).


“The industry’s mediocre profitability not only makes it foolhardy for a new player to aggressively enter the market; it also calls into question the rationality of paying ever higher prices for spectrum,” Kerrisdale analysts say. “When an entire network can only generate a single-digit return on capital, there is a limit to how valuable a single input to that network can be, especially at the margin.” 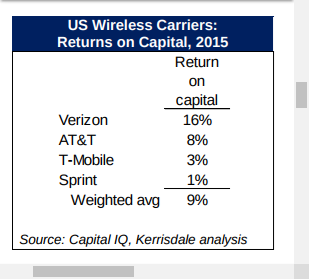 
Across most of the land mass, there simply are not enough people, served by any single carrier, to exhaust capacity. With the caveat that it is peak use, not average use, that matters when designing a network, the “typical” cell tower coverage area does not suggest especially demanding capacity supply.


As an example, assuming a typical tower coverage radius of 2.5 km, a single cell tower could cover about 20 square kilometers containing 5,000 people.


If a single carrier has 35 percent market share, that means supporting 1,800 users.


At a usage rage of 3 GB per month per user, the tower would see 177 GB of average daily traffic.


Assuming only 10 MHz of downlink bandwidth, three sectors, and 1.5 bps/Hz/sector of average spectral efficiency, the site’s capacity would be 45 Mbps or 486 GB per day. Not a crisis, in other words, on average. Peak demand is perhaps another issue, but it is worth noting that the bulk of a consumer’s smartphone usage tends to happen at home, presumably therefore not at “peak” hours (drive time).


Dish Network always has been a firm willing to invest in spectrum. But now it faces a clock: unless it has built out a network reaching 70 percent of U.S. consumers by 2020, it will lose a batch of licenses. Other holdings will need to reach similar levels of coverage by 2022 and 2025, or the licenses are forfeit.


And it appears those deadlines will hold even if Dish Network sells the licenses to another firm. So there is a possibility that potential buyers can simply wait until Dish loses the licenses. The assumption is that the spectrum will eventually be put back up for auction, at which time prices will be lower, if the assumption about declining spectrum prices is correct.

Charlie Ergen always has been a gambler. Some might say the odds are lengthening against him where it comes to a payoff on mobile spectrum licenses.
at May 21, 2016

There Essentially are No New Customers for U.S. Mobile

“There is no infusion of new customers in the system,” Hans Vestberg, Verizon CEO, said on the firm’s fourth quarter 2022 earnings call. Wh... 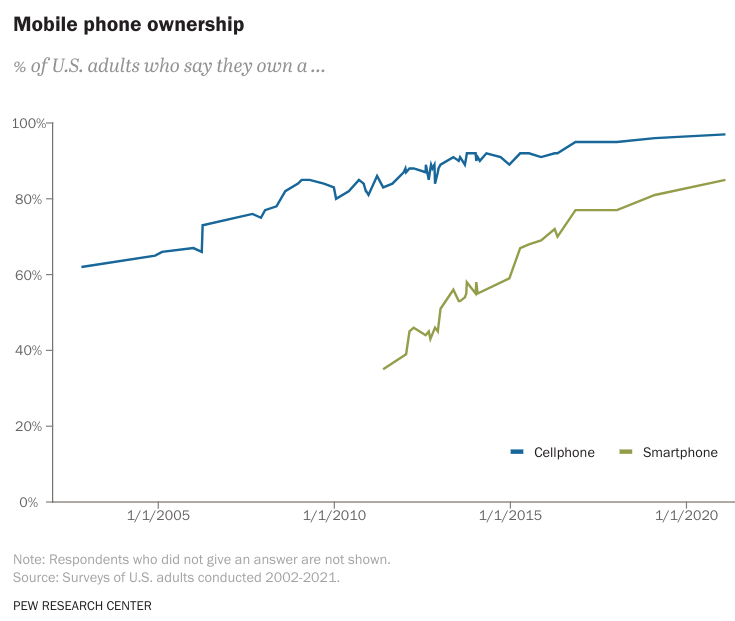